A Writer’s Paradise in Frayssinet, France 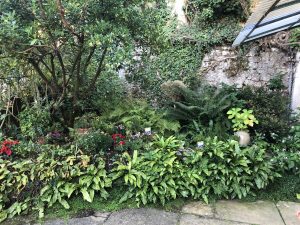 I visited France this past October, staying in the very small village of Frayssinet. A truly remarkable experience, it was both an artist’s retreat where we expanded our creative horizons by painting, or in my case painting and writing, and a vacation.

The experience was truly authentic. No five-star hotels for us, our accommodations were in a former convent built in the 15th Century. We had simple, yet private rooms and baths, opening the window to the chilly air at night. We did laundry as a group, hanging clothes up to dry in the fresh air under a glorious autumn sun.

The Countryside and Food

The French countryside where many of us engaged in daily walks was breath-taking. Buildings of stone speckled the landscape, and often it felt like we were in a perfect French town on a movie set rather than reality. I loved the stone structures and the French attitude that when a building falls into disrepair it’s allowed to simply fall down. Then the stones and materials are reused in new construction. I had the feeling HGTV probably isn’t terribly popular here.

For 11 days we visited surrounding towns, shopped at open air markets, ate fresh foods that were as beautiful as they were delicious, practiced Pilates, and honed our creativity. On the three occasions we visited open air markets, members of our group volunteered to help grocery shop buying fruits, vegetables, cheese, or bread. People normally shop for fresh foods at the markets every day, so there are no preservatives or pesticides. Twice we ate fruits – pears and plums that were like indulging in candy. I’ve included a photo of a salad

we have for lunch at a B&B in Creysse – truly almost too beautiful to eat. Each night we returned to Le Vieux Couvent for aperitifs and an incredible dinner that was normally five courses. Many group members posted luscious photos of each meal on Facebook.

We also learned a great deal of fascinating history. Afterall, Europe is thousands of years old, compared to America’s few hundred. Frayssinet offered one church and a single bar. The bar is only open Friday evenings and attracts most the townspeople, and it was great to be a part of that. The Catholic church was just across the street and the bells rang on the hour (except for a few during the dark of night). Frayssinet was occupied by the Nazi’s during World War II. These bells ring out as a reminder of freedom, so residents never forget. When wars are fought on your own soil, you have a different perspective. Having traveled throughout Europe, everything is affected by both world wars, but especially the second. People here know their history and understand the dangers in it being repeated. 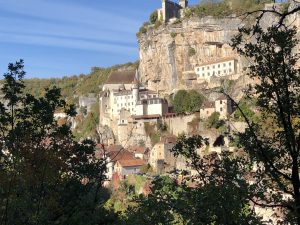 We walked bridges in existence since the 11th century, sang an impromptu “Do, Re, Mi”, in an acoustically perfect church, visited one of the few Black Madonna’s in existence in the town of Rocamadour which is situated on top of a steep cliff, shopped quaint hamlets, viewed two working pipe organs hundreds of years old, and walked many miles over rough cobblestone streets. That’s a small sampling of our adventures.

All of us found inspiration in this quiet, rural environment. I wrote – working on my second novel, then did something I never dreamed of – I wrote poetry and I painted. Others who were inexperienced painters turned out spectacular works of art. We all surprised ourselves, I think. Everyone had to have a work to showcase on our final evening, as Frayssinet residents turned out to admire our creativeness at a reception. It was almost like being famous.

As I noted in a previous post, I have never even held a paintbrush in my hands. But getting the colors just right for the stenciled frame around the poem I wrote (as least I think, it was a poem!) for our gracious hosts Bill and Corinne pushed me creatively to places I’d never considered.