Celebrate Breast Cancer Awareness Month This October by Getting a Mammogram 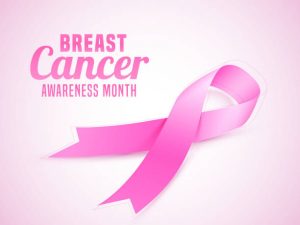 It was a routine mammogram. But there was a tiny bump on one breast, which was biopsied and sent to a lab. Less than a week later my mother called. “There’s something I need to tell you,” she said.

Whenever Mom prefaces news with this statement, instinctively I know that it won’t be good, or just so-so. “I have breast cancer,” she said, matter of fact. Mom was calling each of her children individually to tell us personally. She had recently celebrated her 78th birthday, and the diagnosis was a shock. My mother has cancer, I remember thinking.

Mom has experienced much adversity in her life and isn’t fazed by much. Completely unruffled, she explained the tumor was discovered early and it was very small in size. Because it was an aggressive form of breast cancer, she would undergo a lumpectomy followed by radiation treatments. I suggested I come to Nebraska for support, but she insisted it wouldn’t be necessary.

I kept in constant communication with my brothers the day of her surgery. Many prayers were said, including by her oncologist who believes the healing power of prayer. Relatives stayed with her during her initial recovery. She would have a total of 20 radiation treatments over several weeks.

What I recall most vividly during that time is that radiation hardly slowed her down. At a funeral luncheon she was helping serve, she told the other volunteers, “I have to run to my radiation treatment. I’ll be back in 20 minutes.” My cardiologist always inquires about my mother. Relating this story, he smiled and shook his head in awe. “I know,” I replied. “She’s pretty amazing.”

Mom passed the five-year mark without the cancer returning, for which we are grateful. She also made it clear that if the cancer should come back, she is at peace having lived a full and vibrant life.

I get an annual mammogram without fail. My OB-GYN reminds me that it’s especially important, given my family history. As technology has advanced, I request 3-D mammograms, which are much better at spotting a cancerous growth.

It was a routine mammogram that spotted my mom’s very aggressive form of breast cancer. If you are over 40, yearly mammograms need to be a part of your healthcare regiment. If you do not have insurance, there are programs/organizations that provide free or reduced cost mammograms. Here are links to three:

Celebrate Breast Cancer Awareness Month this October by getting a mammogram.