Kamala is the oldest daughter of Donald Harris who was born in Jamaica and immigrated to the United States to study economics at Stanford, and Shyamala Gopolan, who was from India, graduated from Stanford as well, and become  a renowned scientist studying breast cancer. She was inspired primarily by her mother and forged her own path rooted in justice for all. She graduated from Howard University, following in the footsteps of her lifelong heroes: Constance Baker Motley, a district judge and hero of the Civil Rights Movement; Charles Hamilton Huston a prominent attorney and law professor at Harris’ alma mater, Howard University; and the first African American Supreme Court Justice, Thurgood Marshall. She then attended Hastings College of Law. She was appointed Deputy District Attorney before becoming the first female District Attorney of San Francisco. From there Kamala become the first Black woman Attorney General for the state of California, which led to her being voted into the United States Senate, the second Black woman to hold the office.

In 2020, Kamala announced her candidacy for President of the United States. Her campaign lacked the necessary 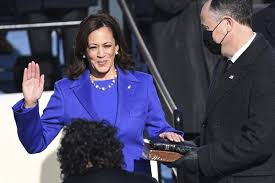 funds for seeking national office, but another window of opportunity was opened when Joe Biden asked Kamala to be his running mate. In their historic win, Kamala Harris is now Madame Vice President, shattering more barriers, and the providing the hope and promise that all young girls can aspire to the highest office in the land. On Inauguration Day, Kamala wore deep purple as did several other notable women attendees in honor of the suffrage movement, the decades-long campaign that culminated in the 19th Amendment giving women the right to vote in 1920.

Kamala Harris’ groundbreaking achievement is a wonderful message to begin Women’s History Month and look toward the future.