A City of Eight Million Stories

There used to be an old TV show that began with the opening, “In a city of eight million stories…” referring to New York City. My niece, Lauren, and I visited the Big Apple for a week in May and there were stories all around us.

For example, on our first night in town while having dinner at the Top of the Rock at Rockefeller Center, we were surrounded by smartly attired young professionals ordering expensive cocktails and dinner. The writer in me began to wonder where these very successful people worked and lived. Did they reside in the city in fabulous apartments ala Carrie Bradshaw, or had they ventured into the city from the suburbs for Sunday night with friends? Did they work in high powered jobs on Wall Street or the publishing industry, or were they office workers in mundane, possibly even boring occupations they detested?

Later during the trip while on the subway, we encountered a sleeping homeless man surrounded by piles of plastic bags and a grocery cart filled with his worldly possessions. How did he become homeless? Was he a veteran or cursed with the tragedy of mental illness? Did he spend his days riding the subway because it was the only place he could safely survive? Would he ever find a better life, able to leave homelessness behind? In the mob scene that is Times Square after nightfall, I assumed most of the people present were tourists or theater goers. Aside from New Year’s Eve, would any native New Yorker brave the noisy hordes, blaring cabs, and masses of selfie-taking youth? What were their stories?

Even our Uber driver had a story. What made him decide to become a driver in one of the world’s busiest cities, and as Frank Sinatra sang, one that never sleeps? Money? A sense of adventure? Finding his footing in America?

Every city of course contains stories, no matter the size. In New York City, these encompass every culture, race, nationality, gender, creed, and socioeconomic level. I could write a story about any of the examples I listed, and perhaps I will. For writers, it goes without saying that we always need to be conscious of what’s occurring around us. That leaves us with an infinite pool of story ideas for today and the future — always a positive thing. 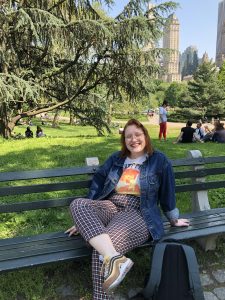 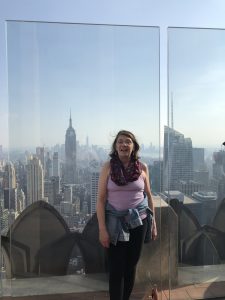 Spectacular view from the Top of Rockefeller Center