When my niece, Lauren and I visited New York City this past spring, one of the plays on our “must see” list was the mega hit, and 2016 winner of 11 Tony awards plus the Pulitzer Prize for drama, Hamilton. While Lin-Manuel Miranda took some historical liberties, quite a bit of the play is based on historical fact. It also made me consider Miranda’s storytelling, which some have called “revisionist history” because the Founding Fathers aren’t played by white men but people of color. I don’t see this as revision on Miranda’s part, but as one of inclusion in the story of the birth of this nation, where people of color have been marginalized or left out for centuries. People of color are just as much a part of America’s history as European whites. That’s the point I personally believe Miranda wants to get across in the story of Hamilton.

Despite its inaccuracies, (which in reality, with the exception of the ending, are pretty minor) the music, singing, and dancing is fabulous. What’s important is what the story led to, which is that both Lauren and I began researching the life of Alexander Hamilton, discovering a story neither of us knew. 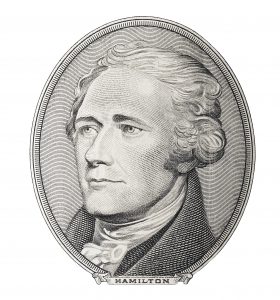 For example, we didn’t know Hamilton was responsible for writing 51 of the 85 Federalist Papers, anonymously published documents making a case for the U.S. Constitution. As we celebrate Independence Day this week, it’s a good time to remember the main points stated in the papers:

I also didn’t realize Alexander Hamilton was the first Secretary of the Treasury and the financial system he founded is intact today. The biggest fallacy in the play is the timing of the fatal duel between rivals Aaron Burr and Hamilton. The play ends with Burr shooting Hamilton immediately after Burr’s failed run for the presidency in 1800. In reality, the duel occurred four years later in 1804, after Burr, who was then the U.S. vice president, ran for governor of New York and lost. These were things about Aaron Burr I didn’t know. The musical also makes Burr out to be the villain but if you look at history, both Hamilton and Burr were flawed men. But every good story needs a villain.

On this Independence Day, why not do some research on another Founding Father and see what new facts you learn!