Judging a Book By Its Cover 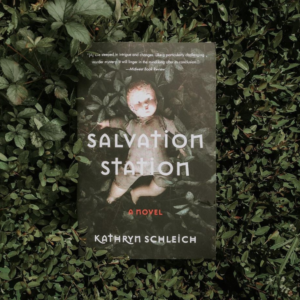 Seemingly everyone has commented on Salvation Station’s cover and how creepy it is. The adage that ‘you can’t judge a book by its cover’ is often true, but in this instance, that was my intent. I wanted the cover to let potential readers know this was not only a crime novel, but that a key part of the plot was the murder of two young children and their pastor father, their bodies buried in the parsonage garden. She Writes Press offered eight cover options of photos and typefaces.

Five were of stone angels, most praying showing smears of blood. Another had a hole in it’s head. Bleak certainly, but I didn’t feel they communicated the what Salvation Station was about. The remaining three immediately caught my eye, one more than the others. They had something in common – all depicted dolls.

The ultimate purpose of a book cover is, of course, to sell your book. In her 2012 Wow Women On Writing article, Creating Book Covers That Sell, author Deana Riddle began her piece by describing the three marketing goals a good cover must accomplish:

With three possible selections, I asked for feedback from a trusted group who I also knew would be completely honest. One person commented that a different cover with half of a different doll’s face buried made her think of Chucky, the killer doll. The moment she mentioned that, I saw it too, and the option was axed. Someone else thought the typeface was almost Satanic. This I had to think about. I didn’t see it that way, feeling the font represented the aspect of religious fraud that is crucial to the story. Other articles suggested posting various options for the cover on social media. If I did put the cover choices on the internet, my concern was having too many people with differing opinions making the selection process even harder.

The final point Riddle made in her article was this: “Everything about your cover (from title and imagery to book description) should clearly indicate what the reader should expect from reading your book.”  She Writes had the option to change the title if they felt it didn’t adequately describe the work. Fortunately, the title I’d settled on when the story was still incubating as a screenplay turned out to be the best choice.

Similar articles made two additional points in designing the best book cover – keep your cover simple and remember that words are pictures too. In simplicity there is the image and six total words – the title, author’s name, and the words, a novel. The distinctive typeface showcased the religious aspect. Designers used the font at the beginning of every chapter which worked very well in keeping with the theme.

If you’re an author with a Big Five publisher, you won’t have to worry about the cover as they’ll make the decision for you. I enjoyed having the freedom to choose and judging by the response made the right decision.