Plentiful Harvests and Bizarre Rituals: Stories That Have Haunted Me Since Childhood

The countryside can be a pretty scary place, at Halloween or otherwise. Horror movies often use a rural setting as the location for blood, gore, and multiple killings. But the idea of a plentiful harvest season is the centerpiece of the two most frightening stories I know. 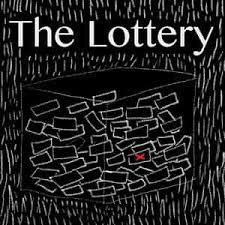 Shirley Jackson’s terrifying short story The Lottery, was first published in the June 26, 1948, issue of The New Yorker magazine. The townsfolk of a rural area gather for the annual lottery. One of the older residents quotes a proverb, “Lottery in June, corn be heavy soon.”

I hadn’t read the story, but in 1969 while in the fourth grade, I saw the film version. It was one of the days we had a substitute teacher, and subs never seemed to have a lesson plan, so they showed us a film strip or movie. There is a disclaimer at the beginning of The Lottery that the subject matter may be disturbing, and that it is fiction. But when you’re in the fourth grade, who reads that? After the film’s horrific conclusion, there was no discussion in class about the main ideas the story explores, including communal violence, individual vulnerability, and the dangers of blindly following tradition.

I never forgot seeing The Lottery. When I saw it years later on YouTube, it was just as I remembered, down to the brownish red tint of the film itself. And just as frightening. But as an adult, having written Salvation Station, a crime novel with the concept that blindly following religion can be detrimental, I understood that the message of indiscriminately following anything without question is not only as true today, but also as dangerous. 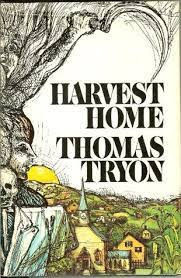 Harvest Home, by Thomas Tryon is a novel I couldn’t finish. It certainly isn’t considered literary classic, or discussed in school as is Jackson’s story, but it is considered a horror story for the masses. As the title suggests, Harvest Home focuses too on a community ensuring of a bountiful harvest through the practice bizarre rituals. I was reading the book for extra credit in English during the ninth grade. When the narrator sexually assaults a woman whom he doesn’t like, and the ensuing bloodshed, I was done. I remember telling my teacher why I couldn’t complete the novel. She asked how far I had read, and it nearly made me physically ill to recount the story.

When I read reviews for this post, I realized that at its core, Harvest Home is about the fear men often have of women. It mostly stems from the ability of women to give life. These are the very same points I addressed in my master’s thesis on the image of Catholic women in Hollywood films. For centuries, the patriarchy of the Catholic Church has relegated women to second class by declaring the natural occurrence menstruation as unclean and demeaning females further by blaming our gender for ‘original sin’ in the Garden of Eden. Tryon had an anti-feminine agenda as well, depicting the men of Cornwell Coombe being emasculated by the women, in this case through feminism, Wicca, and the Goddess movement. The men who know ‘the truth’ and try to escape the village, pay a nasty price.

Both of these very frightening stories left an impression on me. Each have messages on following traditions without giving them any thought or questioning the horror of what they truly represent.